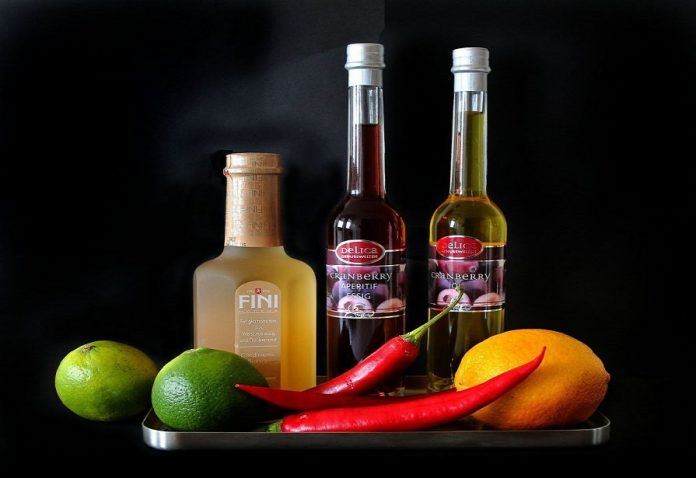 Before we address is apple cider vinegar the same as white vinegar, let us talk first talk about vinegar itself.

There are numerous types of vinegar, and the main difference between them is their source. While they are processed in the same manner, where they come from sets them apart. During the processing (fermentation process), acetic acid is formed, which gives the vinegar its distinct taste and smell.

Earlier, we said that there are various types of vinegar. Let us take malt vinegar as an example. It is made by fermenting grains. You might be thinking about what kinds of grains, right? Although they can be any grains, the most common one is wheat, rice, or barley. If you have ever visited the UK in your life and had fish & chips, their signature dish, you would have indeed tasted malt vinegar. It is a popular ingredient used to add flavor to this dish. Like malt vinegar, there is also coconut vinegar. It comes from fermenting coconut juice.

The word vinegar comes from the French term “vin aigre”. Can you guess what it means? No? Well, it means sour wine. It is not clear when vinegar’s production started. However, historians trace its usage to ancient civilizations like the Babylonians. They existed around 3,000 BC. They used it as medicine and in cooking.

How is it produced?

One can make it through a fermentation process in which producers add ethanol. There are people who substitute ethanol with sugars from acetic acid bacteria. Interestingly, the traditional fermentation process takes months or even years to complete. However, science has come a long way now. Instead of waiting this long, the manufacturers add a bacterial culture.

What is the purpose of adding it?

The bacterial culture increases oxygen which speeds up the fermentation process. It is how manufacturers meet the ever-growing consumer demand.

There are numerous differences between the two. Let us look at the main or common ones:

Now that you know the difference between vinegar and apple cider vinegar, let us review their uses.

There are various uses for it, including:

Cooking: It is used for preserving food and pickling.

Baking: We have all eaten cakes that seem as if filled with air and are so light, right? Can you guess what makes them soft and light? It is white vinegar. The white vinegar’s acid reacts with the baking soda to create carbon dioxide, which results in air. The air makes the cake soft and light.

Gardening: If you have a fruit or vegetable garden, you can use it to keep away animals, pests and remove weeds.

It has various uses, including:

Hair: If you are against using shampoo, you can use white vinegar instead. It is an excellent or even better alternative as it restores the pH balance. It also adds shine which is usually lost due to continued hair product use.

Digestion: If you have digestion problems, drink a little apple cider. It increases acid production and bile, a much-needed gastric juice. It helps break down food easier, improving digestion.

Skin: Mix it with equal amounts of water and apply it to your skin. You will see the difference yourself as you will find it a lot cleaner than before.

Flies & Fleas: If you are tired of flies and fleas, pour apple cider into a container. The pungent smell will deter them.

When it comes to cleaning, we do not recommend using apple cider vinegar. Instead, use white vinegar. It is a powerful product that can be used to clean a variety of products. For instance, people use it to clean carpets, clothes or remove stains from furniture. You can even use it to clean floors. Do not forget to mix with water before using it for any cleaning purpose.

How to Store Vinegar?

You might think that it is an absurd question, considering vinegar itself is used for preservation purposes. Although it is true, vinegar still needs to be stored correctly. First, you need to keep in mind that it is acidic in nature. So, any brass, copper, or iron container is out of the question. Why? Due to its acidic nature, these materials will corrode. The best option is a glass or plastic bottle. Store it in a cool and dry place. You may even store it in the fridge.

It concludes today’s blog post on apple cider vinegar vs white vinegar. We recommend that you go through the article again to fully understand its uses and differences. Unfortunately, many people still end up mixing the two which can cause problems. So, to avoid such issues, make yourself familiar with them. Thank You.

How to Secure Your Home from Unwanted Intruders

Why is My Sewer Bill So High?

9 securities Needs in Virginia for your home

admin - December 1, 2021 0
Are you buying bulbs for your home or office but you can’t figure out which bulb is suitable for your room soft...

How to Unclog a Toilet Without a Plunger

Why is my Fridge Leaking Water Inside?